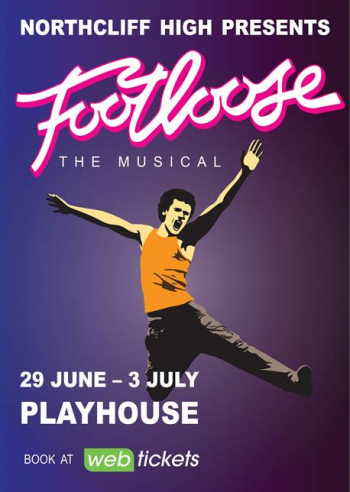 Starring
NORTHCLIFF HIGH About The Show

Fresh from its sell-out performances in Johannesburg to rapturous audience response, Footloose The Musical – the stage musical production of the hit film starring Kevin Bacon – will soon be in Durban at the Playhouse Theatre, and it’s time to “Lose your blues” and head on down to the Playhouse to experience the magic of a live musical show again!

Young Ren McCormack and his mom Ethel, through circumstance, have to pack up and leave their unsettled life in Chicago and move to the out-of-the-way small, one-horse town of Bomont where they are taken in by relatives and have to start a new life.

The town has a ban on dancing and partying because of an unfortunate accident after a raucous dance party in which four young kids lost their lives.

It becomes Ren’s mission to convert the town’s elders to rethink this draconian law and persuade them that “dancing is not a crime” but a celebration of the joy in people’s hearts.

This will be the 38th production for acclaimed Producer/Director Nick Jourdan, who has been responsible for bringing ‘The Adams Family’, ‘Spamalot,’ ‘Sister Act’ and the highly popular previous offering, ‘High School Musical’ to the Playhouse Theatre, to name a few.

Nick has also been responsible for developing talent such as Singer-Songwriter Connell Cruise, who recently landed a US record deal, Carmen Pretorius and Samantha Peo, who were the two leads in the recent international touring production of ‘Chicago’ and Jonathan Rouxmouth, who currently is touring the Barnyard circuit and who recently played the Phantom in the international production of ‘The Phantom of the Opera’.

Many people will be familiar with FOOTLOOSE and the songs “Holding Out for a Hero”, “Let’s Hear It for The Boy’ and “Almost paradise”.   These iconic numbers are executed with astounding vocal prowess by the young cast of this musical, “knocking them out of the park”, as one audience member put it.

Albeit this is a school production, the young cast and crew boast a superior level of talent and deliver a mind-blowing performance that will entertain audiences of all ages.

The production leads, Lyndan Mayers as Ren McCormack and Alexi Hasell as Ariel Moore, head up a stellar cast that not only inspires the audience with their fun and energy but have an empathy for the slightly more serious moments in the show.

Don’t miss this feel-good experience and the chance to see this cast who have worked tirelessly for three long years to bring Durban audiences this professional and delightful show!