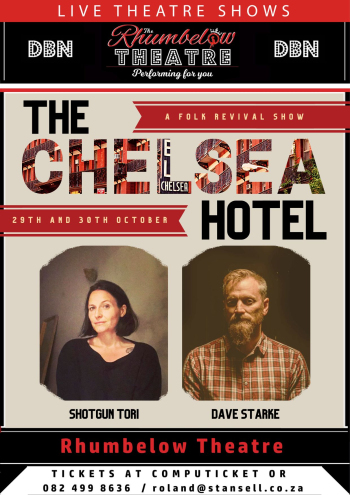 Take a trip back in time to the Chelsea Hotel, New York in the spring of 1968 and meet some of its famous musical residents – Joni, Leonard, Bob, Janis, Edith and Robbie. Wander through the building with your hosts Dave and Tori and listen as the songs float down the hallways – So Long Marianne, Both Sides Now, Blowin’ in the Wind, Me and Bobby McGee and many many more…

Dave Starke is a guitarist and singer-songwriter who originally hails from Cape Town, but has been based out of small-town KZN for the past 15 years. He undertakes various projects ranging from cabaret tribute shows (Leonard Cohen, James Taylor) to Classic Rock (The Katembas) as well his favourite medium of Folk Music. As an original artist, Dave has released two albums, “Duende” (2018) and “Shifting Boundaries” (2020). In 2017 he composed the Original Sound Track for SA Indie-Art film, “The Killing Floor” and, more recently, contributed music to the television adaptation of “Recipes for Love and Murder” (MNET/Acorn). Dave is a two-time semi-finalist in the UK Songwriting Contest. His festival appearances include The National Arts Festival Fringe, The Great Zululand Music Festival, White Mountain Festival and the Barleycorn Music Festival.

Shotgun Tori is a lo-fi indie singer/songwriter from Johannesburg, South Africa who believes that stories are to be shared and not left to wither quietly.

Tori has toured the length and breadth of South Africa, with over 400 live performances at coffee shops, bars, and festivals countrywide. She’s played Oppikoppi, STRAB (Mozambique), Parklife (where she opened the main stage for international headliner Xavier Rudd), Rise ‘n Shine, Up the Creek, Mieliepop, Retrofest, and has had the pleasure of guesting with Laura Burhenn (USA), Matthew van der Want, Lucy Kruger, Tubatsi Mpho Moloi, and Southern Gypsey Queen.

Tori independently released her debut EP ‘Are We Fine Yet?’ in 2011 and the track ‘Sweet Weather’ hit the No 2 spot on Jon Savage’s 5fm Chart Show. The video had a 9 week run at No 1 on the MKTV Top 10, and was nominated for an MK award in the “Best Solo” category. In 2012 she was one of the Top 10 finalists for the Converse Get Out of the Garage competition.

“Dave Starke’s gorgeous voice and engaging stage persona embody Cohen and win over the audience from the first few notes of his first number. Music lovers should not miss this consummate tribute to one of the world’s great songsmiths.” Mike Raftery, Durban Folk Club

“Singer-guitarist Starke pays excellent tribute to Leonard Cohen, offering not only a well-researched history of the man, his poetry, music and achievements, but also insight into Cohen’s thought processes. It is an elegant and captivating show with the cool and confident Starke doing a great job with hits such as ‘So Long Marianne’, ‘Suzanne’, ‘Sisters of Mercy’, ‘Hallelujah’ and the moving ‘Treaty’, as well as other hits and lesser-known material. Highly Recommended!”  Billy Suter, The Mercury

Reviews for “Shifting Boundaries” and “Duende”

“This is the height of reverential beauty….naked holiness…evidence that Starke is a master writer.” Michael Erfort, Oh Captain, My Captain

Bar Available
(no alcohol may be brought on to the premises)