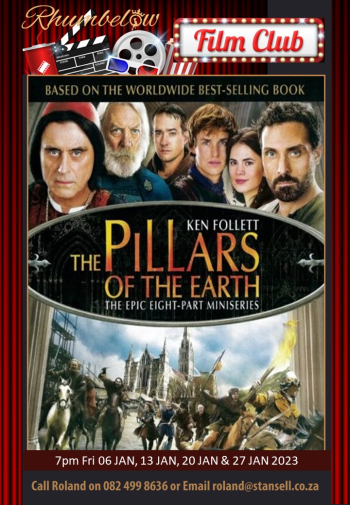 Starring
About The Show

ON THE BIG SCREEN

PILLARS OF THE EARTH

Set in 12th-century England, this eight-hour miniseries based on Ken Follett's best-seller begins when a mysterious secret disrupts the succession to the English throne and an unlikely member of King Henry's family assumes power. As battles are waged for the rightful heir, Bishop Waleran Bigod and the Hamleighs manipulate the conflict to meet their own needs. Meanwhile, a fire destroys Kingsbridge church, giving master builder Tom, son Alfred and stepson Jack the chance to fulfill diocese leader Prior Philip's lifelong dream of building a magnificent new cathedral. The bishop, though, has other ideas, creating an epic test of passion versus greed ... and ultimately revealing the long-hidden secret.

The succession to the crown of England is left in doubt after the heir apparent to the throne dies in the White Ship disaster in 1120. Eighteen years later, in 1138, this lack of heir causes Henry I's daughter, Maud, and nephew, Stephen, to compete for the throne. Church politics see Philip, a monk, elected as the new prior of Kingsbridge, which leaves him indebted to Archdeacon, and soon to be Bishop, Waleran. Lady Aliena of Shiring rejects the marriage proposal of William Hamleigh, and Tom Builder and his family are left destitute when William Hamleigh dismisses them from building his house. While in the forest, they meet Ellen and Jack, a mother and son living free in the woods. After the death of Tom's wife, Agnes, in childbirth, and the abandoning of the newborn, the group end up at Shiring Castle just as it is attacked by the ever ambitious Hamleighs.

Tom, Ellen, and the children make their way to Kingsbridge Priory and encounter Tom's abandoned baby taken in by the monks. A fire started by Jack destroys Kingsbridge church and its holy relic, giving Tom, his son Alfred, and stepson Jack the chance to settle down and build a new cathedral. Prior Philip learns the power of politics when he gets caught between Bishop Waleran and the Hamleighs' machinations for Shiring Castle. Kingsbridge is rocked by Alfred's accusation of Ellen being a witch, and a trial that Waleran personally oversees. William and his underling, Walter, ambush Aliena and Richard in a brutal attack at Shiring that leaves both siblings scarred. William forces himself on Aliena and, as he rips off her dress, rapes her. Aliena makes a life-long promise to her father, Earl Bartholomew to regain the family honour, and Ellen makes a daring escape.

In Winchester, Aliena fears that she is pregnant with William's child. They appeal to the king for clemency for her father, but Bartholomew is beheaded publicly anyway, and Richard is offered a knighthood. Aliena then starts a fleece middleman business to help earn money for Richard's expenses. Tom, Philip and William find themselves in a standoff over access to the Shiring quarry, and Jack is injured in a duel with Walter. Waleran and Regan plot to have the cathedral moved from Kingsbridge to Shiring, and invite the king to Kingsbridge to observe the feast day of St. Adolphus. Despite his injury, Jack's artistic talents take hold as he carves and paints a statue to honour the cathedral's patron saint. After Philip recruits peasants to assist with building, King Stephen visits the cathedral work site but collapses in a nightmare-induced fit before the statue.

In 1141, in Shiring, Regan hastens her husband's death for the sake of her son, and arranges to have Waleran absolve William of all past and future sins. Meanwhile, Maud is besieged at Lincoln Castle, and it is unclear when Robert of Gloucester can come to her aid. King Stephen holds court in Winchester, and William applies to have his father's title transferred to him, only to learn that Richard, now a battle-hardened knight, is also a claimant. Aliena, now a wealthy merchant, is in town to support her brother. Later, Philip travels to Lincoln to reclaim quarry rights - but Stephen is frightened by Jack's appearance and orders his death. The battle between Stephen and Gloucester sees each side's leader being taken hostage. The Hamleighs and Waleran switch allegiance, and Philip is tortured under Waleran's orders.

Philip is rescued by his brother Francis, and finds Jack "risen from the dead". Waleran and Regan manipulate the prisoner exchange so that they remain on the winning side of the war, and Waleran helps Gloucester by suggesting a replacement for the king's son, Eustace. The Hamleighs and Philip are offered terms by Maud to Shiring's estate and resources, but at a steep price. Tom wants Jack and Alfred to be friends, but Alfred's jealousy over Jack and inheriting his father's tools is too intense, and he smashes all of Jack's gargoyles. To resolve the tension, Jack is offered an assistant and overseer position by Philip, on the condition that he takes the vows of a monk - he accepts the deal against Ellen's wishes. Meanwhile, William is encouraged by Waleran to attack Kingsbridge and stop the fleece fair. In the ensuing chaos and inferno, Aliena is burnt and Tom is murdered by William.

The dead from William's raid are buried, and Richard returns from war to find his sister penniless and unable to support his knighthood. Alfred offers himself to Prior Philip as master builder, and also to Richard as sponsor, and Aliena has to choose between her feelings for Jack and her oath to her father. Both Alfred and William marry, although both brides are soon victims of cruelty. Ellen, having cursed the marriage, helps Jack escape the priory, and he leaves for France. Regan murders the Archbishop, and eight months later, forces Waleran to intercede about William's long-delayed earldom. The ceiling disaster at Kingsbridge becomes a way for Waleran to replace Philip. In the rubble, Aliena gives birth to Jack's son and is thrown out by Alfred, but Ellen encourages her to seek her lover. Meanwhile, Jack admires the revolutionary Gothic work being done at the Basilica of St Denis.

It is 1146, and after his time in St. Denis, Jack learns how to fulfil Tom's dream of a high cathedral filled with light. Aliena successfully tracks Jack in France and the two reunite. As they return, they arrive in Cherbourg where he learns of his father (with author Ken Follett in a cameo role) and meets his family. Meanwhile, Waleran offers Philip the archdeacon position but he declines it due to Waleran's ambitions. In battle, Richard slays Gloucester, pleasing the king, who can only repay him by asking that he to go on crusade. With the arrival of Jack's weeping statue, Kingsbridge becomes prosperous again, infuriating Regan and William, who plan another attack. Tipped off by Elizabeth, however, Philip is able to rally resistance from the townsfolk who unite to build a town wall. Philip regains control after Cuthbert dies in a failed attempt on Jack's life, and William tires of his mother's insatiable control over him.

Ten years later, in 1156, Richard returns from crusade seeking again his title, which is finally granted to him by Eustace. With the support of Elizabeth and Aliena, he is able to reclaim Shiring Castle after a duel with Walter. Meanwhile, Jack's fixation with the cathedral and the appearance of cracks in its roof leads to tension with Aliena. Waleran's continued scheming leads to the death of Alfred and the arrest of Jack by the newly appointed Sheriff, William. Stephen's hopes are shattered with the death of his son in battle. At Jack's trial, Ellen produces Shareburg's letter, and Martha produces his ring, as evidence of Waleran's complicity in the murder of Prince William on the White Ship. In the chaos of the trial, both William and Waleran die, and Jack and Aliena finally marry. Fourteen years later, in 1170, the cathedral and its glass windows are finally finished.

Food available at the venue.

Attendance is restricted to

(no alcohol may be brought on to the premises)