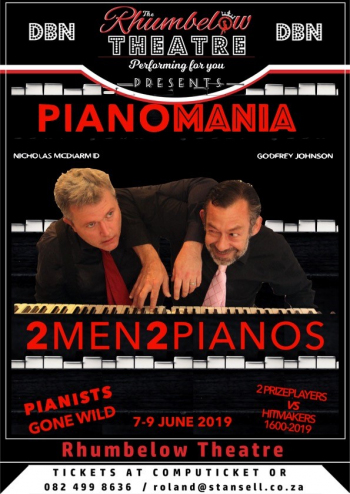 Two virtuosos, each with their own piano bring you a show that will excite, evoke and entertain. The show includes the work of Bach, Mozart, Sondheim, Bowie, Madonna as well as hilarious original songs by Johnson and McDiarmid.

The duo create orchestral magic while keeping the audience satisfied with familiar melodies and rollicking humour. They explore all styles from baroque to boogie. ‘ 2 Pianos 4 Hands’ will include hilarious characters, sketches, musical arguments and good old fashioned piano playing.  Not to be missed!

Godfrey Johnson has performed in over 40 productions. He has performed throughout Europe, Canada and South Africa. In 2009 he performed with Claire Watling at The Jermyn Street Theatre on The West End, London with their award winning show, ‘Kissed by Brel’. He has starred in numerous films including David Moore’s, “ Once Upon A Roadtrip’. He recently composed the music for Pieter-Dirk Uys’, “ Die Van Aardes van Grootoor.” Johnson was recently nominated for three Fleur du Cap Awards for his work in “ Vaslav.” ( best actor in a musical, best composer and best performance in a one- person show)

Having made his concert debut with the Cape Town Symphony, playing Ravel’s Piano Concerto in G at the age of 19, Nicholas continued his musical performances as a pianist and violinist whilst focussing on a career in publishing.

He performed in The Sydney Chamber Orchestra between 2011 and 2013, and continuing his musical development through teaching, accompanying and writing, Nicholas returned to performing full time in 2015, and has enjoyed successful performances at the Auto & General Theatre on the Square, the PopArt Theatre and the Foxwood Theatre.