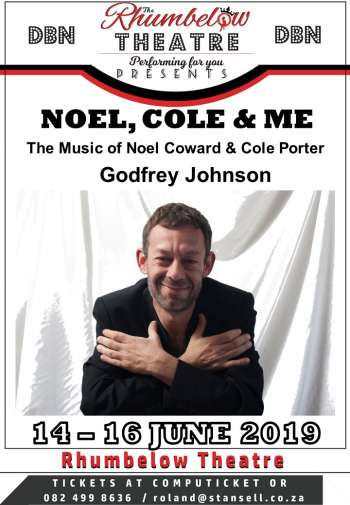 NOEL, COLE & ME - The Music of Noel Coward & Cole Porter

NOEL, COLE & ME
The Music of Noel Coward & Cole Porter

Performer extraordinaire, Godfrey Johnson has created a show featuring some of the greatest works of Noel Coward and Cole Porter. Familiar songs reworked and reinvented by this award winning performer will surprise and seduce. ‘Coward and Porter’ features some of Coward’s most popular songs such as ‘Mad About The Boy’,’Mad Dogs and Englishmen’,and ‘Mrs Worthington’. Cole Porter classics will include ‘Miss Otis Regrets’,’Too Darn Hot’ and ‘Let’s Do It.’

Noel Coward was one of the twentieth centuries most prolific song writers and playwrights. His work has transcended time and continues to inspire the modern audience with words and observations that matter today. Cole Porter has touched the hearts of audiences for decades with some of the most beautiful songs written in the twentieth century.

Join Johnson as he takes you on a musical journey of familiar musical gems in a show packed with humour , pathos and amazing musicality.

Godfrey Johnson has performed in over 40 productions. He has performed throughout Europe, Canada and South Africa. In 2009 he performed with Claire Watling at The Jermyn Street Theatre on The West End, London with their award winning show, ‘Kissed by Brel’. He has starred in numerous films including David Moore’s, “ Once Upon A Roadtrip’. He recently appeared on  the TV shows ‘ Black Sails’ and ‘ Outlander’. In 2015 he composed the music for Pieter-Dirk Uys’, “ Die Van Aardes van Grootoor.” which enjoyed a successful run at  The Theatre On The Bay.  Johnson was recently nominated for three Fleur du Cap Awards for his work in “ Vaslav.” ( best actor in a musical, best composer and best performance in a one- person show)

“Johnson is a cabaret master” (Coward and Cole) - What’s on in Cape Town.