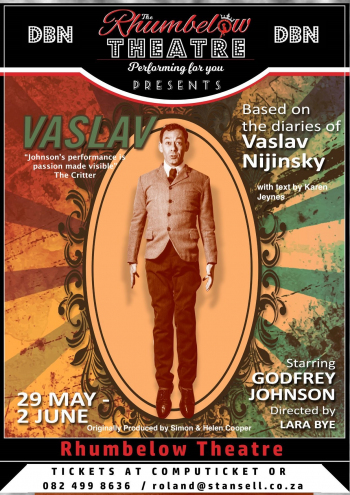 VASLAV - Based on the diaries of Vaslav Nijinsky

The Rhumbelow Theatre is proud to present the theatrical tour-de-force that is Godfrey Johnson in ‘Vaslav’.  Harnessing the potential of three arts-in-one, Johnson ignites the spirit of Nijinsky in this celebration of the magnificent power of sheer performance.

Nominated for three Fleer du Cap Awards in 2015, ‘Vaslav’ has been hailed by critics and audiences alike, with demand for this one-person play extending theatrical runs on more than one occasion. Award winning actor, singer and pianist, Godfrey Johnson delivers an astonishing performance, seamlessly piloting his audiences across the vast plains of a Europe at war with itself, as experienced by the one man to have ever caused a riot through dancing: the elusive icon of both the Imperial Russian ballet and the Western avant-garde, Vaslav Nijinsky.

Seen as both genius and curiosity, Vaslav Nijinsky remains an intriguing figure today, with numerous biopics and biographies shedding light on this revolutionary of the dance. Powerful in this respect alone, Nijinsky’s inner world could be as disruptive and spectacular as his animalistic choreography suggests. “Gigantic leaps across the stage, he flew, so to speak, to the skies…” gasped Marcel Proust. “Can life be so rich, so splendid, so passionate”, said a haunted Jean Cocteau

The birth of today

‘Vaslav’ is an extreme portrait of our humanity, drawing much from the diaries Nijinsky kept over the six weeks of his treatment in a mental asylum, being one of the first individuals to have received the psychiatric diagnosis of schizophrenia. A rare document revealing the fragile borders that define our sanity, ‘Vaslav’ marries the dancer and the mental patient with the social and cultural upheavals of a world struggling with its own borders.

It is no coincidence that Mikhail Baryshnikov is currently playing Nijinsky in ‘Letter to a Man’ on European and US stages; debuting a year after ‘Vaslav’ and a very different take on the character, these two masterpieces suggest the enduring humanity of our collective experience.

Around a world in one play

“Irritating to the nervous system is the continuous thudding of a savage tom-tom, hisses… boos,” cries a rioting Parisian. “Jazz…a revolution, like the writings Nietshce and Proust, the scientific discoveries of Einstein, the art of Cezanne…” explains an American beatnick. “They said Chapin was a fan…President William Tuft would have loved this attraction.” Alone with his piano, Johnson gives voice to this phenomenal script, dashing between its cast of characters in a psychological tongue twister.

A unique integration of cabaret, one-person show and classical theatre, ‘Vaslav is the creation of Godfrey Johnson and Lara Bye, based on a text written by the pair, and writer Karen Jeynes. The power of this play makes the highest demands of its performer, and has earned Johnson nominations at the Fleur du Cap Awards across three, diverse categories: Best Actor in a Musical; Best Performance in a One Person Show; and, Best Composer.

The play is a choreography of dialogue, music and movement, with Johnson drawing on the works of Stravinksy, Rachmaninov, Tchaikovsky, Debussy, Satie and his own compositions, weaving the magic of this world directly from the piano.

Since its debut at the Grahamstown Festival in 2014, ‘Vaslav’ has elicited powerful praise from audiences and critics alike.With invitations from producers in Sweden and Canada,

“The opportunity to glimpse genius, both that of Vaslav and Johnson…. If you don’t go and see Vaslav at Kalk Bay Theatre before run ends.... you will be depriving your soul of a unique love-story,” Theatre-Scene, Cape Town