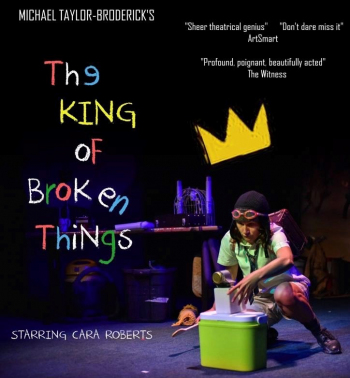 Written and Directed by Michael Taylor-Broderick
Performed by Cara Roberts

The world does its best to break everyone and everything, but afterwards most things are stronger in their broken places. The King of Broken Things is an adventurous and magical excursion into the rehabilitation of broken and discarded objects, hearts included. An ingenious mix of old school theatre magic and modern technology brings this enchanting tale to life in the most endearing way imaginable.

Following on from the hugely successful, whimsical show 1 Man, 1 Light, and the beautiful ethereal, Jakob. respected lighting guru, Michael Broderick brings his latest creation, The King of Broken Things, to the Seabrookes Theatre at DHS for two shows only this week.  It premiered at last year’s Hilton Arts Festival

“I've learnt a few things since becoming a father and this is an attempt to encourage grown-ups to revisit and re-inhabit the magical places in our minds where we freely and recklessly roamed as children. It's about believing in and following your dreams throughout your lifetime. It's dedicated to all the fathers who continue to inspire their children to believe in the magic and beauty of the world,” says Broderick.