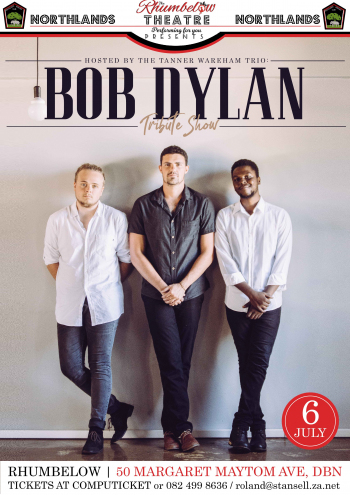 Folk singer-songwriter Bob Dylan is one of the most influential and original artists in American music history well known for using his music to chronicle social and political issues. Bob Dylan has won Grammy, Academy and Golden Globe awards and became the first musician to win a Nobel prize for literature.

A lyrical genius Bob Dylan has written songs that have gone on to be some of Folk and Rock ‘N’ Roll’s greatest hits including Knockin’ On Heaven’s Door, All Along The Watchtower, Blowing In The Wind and The Times They Are A-Changing’. He has written vast amounts of music which has influenced many of the greats that have followed him and still stands as an influence to musicians today.

Tanner Wareham has been training and performing as a musician since the age of six. He has developed a talent to recreate the sound of iconic artists like Dylan, Sting and Young. Having built up a huge demand as a one-man artist in Durban Tanner will be bringing his work to the theatre stage for his debut tribute show. He will be joined by some of Durban’s most talented session musicians Reece Cook (bass) and George Ogollo (drums) who are foremost known for the band Stone Palace but have performed for numerous acts in the Durban scene.

This together, young trio will be bringing the crowd as close as possible to experiencing Dylan in his golden age performing all his greatest hits and most loved works while adding their own upbeat flare to the stage.