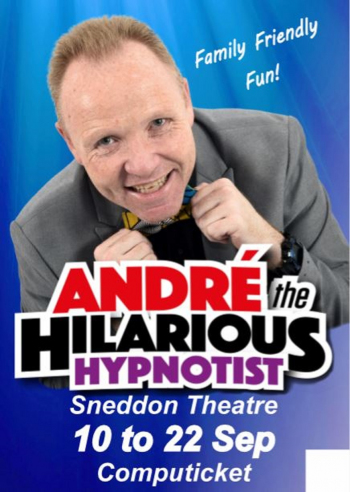 Perennially mesmerising master of SA stage craft, Andre The Hilarious Hypnotist returns to the province of his birth next month, for seasons in Pietermaritzburg and Durban.

Twenty six years in any industry is a long time. But Andre The Hilarious Hypnotist is still going strong – and has no intention of stopping now. Andre started his career in Durban. He’d spend the school holidays touring the various caravan parks up and down the east coast, plying his trade to holiday-makers, until he was spotted by the then well-known promoter, Geoff Egnoss, who helped make Andre a household name.

Initially trained under the mentorship of the late Max Collie, Andre has performed across South Africa, its bordering countries and as far afield as Australia. He is the first to admit that South Africans, though incredibly funny, are very shy when it comes to volunteering to come on stage during his acts. Coupled with this, is the restraint that Andre exercises over the content of his shows.  His are mild in comparison with those of his American counterparts, whose material often veers way beyond what Andre presents to South African audiences.

And it is here that this legendary entertainer believes the success of his show lies. What he offers his audience is pure family friendly fun. Andre delivers a show that you can bring granny and the children to, without worrying about excessive swearing, or tasteless innuendo. The showman provides an 80-minute feel-good act from start to finish, welcoming his voluntary guests onstage to become the stars of the show - not the embarrassment of the evening.

Having said that, Andre has been digging in his archives, and has stumbled across a heap of old routines last seen in the 90’s that are still relevant today. This year’s show is a combination of the old and the new, and the Hilarious Hypnotist will have you in stitches of laughter from the minute he walks on stage until the last person leaves the floor. His volunteers are instructed to react to an entire set of routines, from falling in love, to moving their hips along to the YMCA.

Because no two shows are ever the same, you might just feel tempted to join in the fun a second time around. And don’t be amazed when the person sitting next to you has seen the show a few times too! Not even Andre knows what to expect. And in therein lies the magic that makes his shows unique, as the man himself has no idea what will happen during the time he is on stage.

Not to be missed - Andre’s show can be seen live and in colour at the  Hexagon Theatre on the Pietermaritzburg Campus of UKZN, between 4 and 7 September (book at Ticketweb). He then plays the Elizabeth Sneddon Theatre on UKZN’s Howard College campus in Durban from  10 to 22 September (book at Computicket). Show times are at 20h00 Tuesdays to Saturdays and 15h00 Sundays (no show on Tuesday 17 September). Tickets are R100 per person. Discounts available for bookings of 10 or more.