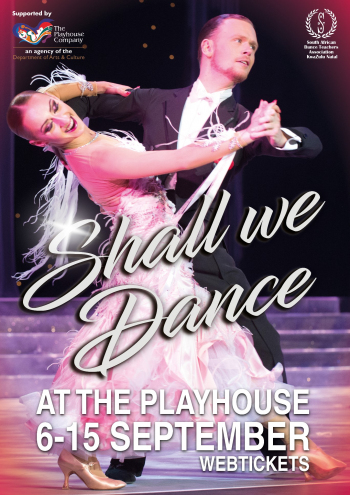 “And a 5,6,7,8 ……” Returning to the Playhouse Opera from 6 – 15 September, the annual dance showcase Shall We Dance is back with more steps than the mythical stairway to heaven.

A couple that has been dancing for six years together makes their Shall We Dance debut as one of the featured couples this year. Hailing from Durban, Lezariah Blignaut and Nkululeko Khumalo have a string of titles to their name including Arnold Classique- Finalists; three times holders of the adult championship standard in the Gold Cup Challenge; KZN Championship Ballroom Finalists; SADTA S.A. Champs where they placed second in the adult ballroom championship and DSSA SA Finalists.

After dazzling audiences last year in their South African debut, the main featured couple from Europe have been invited back for more ‘wow’ Ballroom and Latin numbers. Danish, Nikolaj Lund and Polish Marta Kocik have danced their way across most of the world, notching up trophies and titles from Denmark all the way to Japan for their high energy, vivid, sensual and passionate performances.

Renowned South African dancer, Ryan Hammond takes to the stage with his wife, Angelique. The couple will be best known from their appearances in a variety of local dance-themed competition reality tv shows.

Graceful strong man, Gerhard van Rooyen takes to the stage this year with Amor Kruger. Having just returned from Cyprus, the duo will be sharing the phenomenal Cirque du Soleil, acrobatic style of Adage.

A number of Dance studios from around Durban with a total of 100 dancers have been hard at work behind the scenes, not only choreographing their performance but also creating,  often from scratch, the phenomenal array of colourful costumes which the Durban audiences get to witnesses. These hand-crafted, one of a kind designs can take up an unbelievable number of hours, some with literally hundreds of sequins added onto the garments.

Each year, the showcase introduces some fabulous tracks that accompany the action. Music is a big part of Shall We Dance, with carefully planned eclectic musical choices to support the dance programme – gleaned from contemporary artists as well as ever-greens.

The annual extravaganza is presented by the South African Dance Teachers’ Association, the show is produced and directed by dance stalwarts Caryl Cusens and Neville Letard. Taking up his familiar role as eMcee, Damon Beard will be back on stage with the microphone.

Ticket prices range from R100 to R160, with concessions being offered on specific dates. Booking is through Webtickets or instore at Pick n Pay Supermarkets or Hypermarkets.