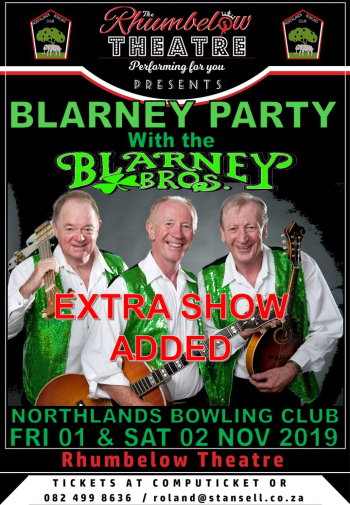 BLARNEY PARTY with The Blarney Brothers

Starring
The Blarney Brothers About The Show

BLARNEY PARTY
with The Blarney Brothers

WE HAVE ADDED AN EXTRA SHOW

Now celebrating their 45th Anniversary, the indefatigable three-man musical outfit have been at the heart of South Africa’s music scene for four decades this year, livening up parties and gala events with their own special brand of music, including Irish ballads, catchy pub songs, popular ‘newies’ and the occasional Irish jig.

Surely our longest-running group with an unbroken performance record, The Blarney Brothers remain at the forefront of the South African entertainment industry.

Comprising siblings Paul and Damien McIlroy and fellow band member, Tony Fisher, who all settled in South Africa in the 70’s, the three Irish-born musicians joined forces to form their own professional band in  August 1974, landing a six-month contract to perform six nights a week at Durban’s Astra Hotel in Russell Street.

With a swiftly growing fan base, they moved on to the Pool Bar at the Lonsdale Hotel, then on to the Killarney Hotel. Thereafter, they signed up as an entertainment act aboard a cruise ship, Oceanic Independent, heading for Cape Town in 1976.

They stayed on in the Mother City to perform at the Elizabeth Hotel, before signing on with the Holiday Inn Group. This led to a Blarney Brothers deal being struck with Southern Suns to appear on their national entertainment circuit, touring up and down the country at regular intervals over the following number of years.

Blarney Brothers leader Paul McIlroy recalls “We came in for a lot of publicity when we were invited to perform on the same bill as Pat Boone and his daughter, Debbie Boone, during their South African tour.  This was in 1977, the year Debbie Boone hit the big time globally with her rendering of You Light Up My Life”.

Shortly after this, with their children at school-going age, the Blarney Brothers settled in Durban. They took up artistic residence at The Barn, the entertainment venue at the then Athlone Hotel, now the Riverside Hotel. This became closely linked with their brand at home, as for some 12 or 13 years the group appeared here every Wednesday and Friday, regularly pulling full houses.

Other associated venues were the River Gardens in Amanzimtoti, and Father’s Moustache at the Malibu Hotel opposite Durban’s South Beach.

A career highlight during the following decade was a commission to make the seven-part television documentary series, You Don’t Have To Be Irish. This saw the Blarney Brothers taking a month off to film in Ireland for SABC 3. The series was screened in South Africa in 1986 over six weeks.

Since the early 90s, the group have undertaken numerous international tours. Besides appearing in the United Kingdom, they have visited the Far East frequently, appearing in Singapore, Shanghai, Macau, Taiwan, Kuala Lumpur, Penang and Australia.

They have performed in many world famous venues, notably the Excelsior Hotel’s Dickens Bar in Hong Kong during the Hong Kong Rugby 7th every March. Last December saw the group performing at the prestigious annual South African Shang Hai Ball.

“We are always game for a party and look forward to renewing ties with old friends as well as meeting new ones. During our 13 years at The Barn we played to an average of 1200 people a week. A lot of couples met each other during our shows. Many of them still come back to see us perform, bringing their children and grand kids to meet us” says McIlroy.

While scores of Blarney Brothers fans need no introduction to the famous group, new recruits can log onto www.blarneybrothers.co.za for perspectives on their rich performance history, as well as the titles of their CD’s, and other information.