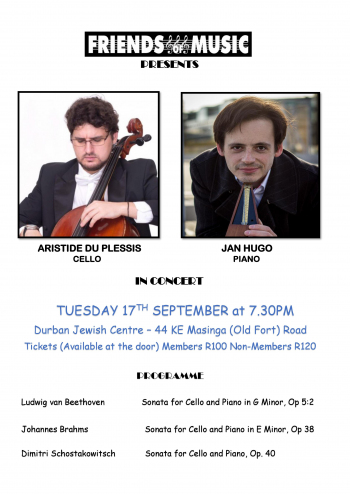 Born in Durban, 1989, Aristide du Plessis has established a reputation as one of South Africa’s leading cellists, both as a soloist and chamber musician. As a soloist he has performed since the age of 15 with all South Africa’s  leading orchestras. He has also performed in some of the world's most renowned concert halls ranging from the Zürich Tonhalle and Vienna Musikverein to the Herkulessaal in Munich, Wiener Konzerthaus and the Berliner Philharmonie.

A graduate of the University of Cape Town he was awarded a scholarship from the prestigious Oppenheimer Memorial Trust which enabled him to further his studies at the Zürich University of the Arts. He has  won numerous prizes in competitions such as the Kiwanis Chamber Music Prize (Switzerland), ATKV Musiq, FMR/Nussbaum and the  Stellenbosch National Ensemble Competition (1st Prize, Axiom Piano Trio), Since his return to South Africa in April 2015, he has been  Co-Principal Cellist with the KZN Philharmonic Orchestra.

Jan Hugo was born in South Africa and started his musical education at the age of 7 in Pretoria. He made his debut at 12 years old with the orchestra playing Saint-Saëns' 5th piano concerto on a tour throughout South Africa. At 13 years old, Jan moved to Italy , where he studied under Francesco Cipolletta in Modena  He was also a student of the Accademia Pianistica Internationale “Incontri col Maestro” in Imola. Jan furthered his studies in Leipzig, Germany at the Hochschule für Musik und Theater "Mendelssohn Bartholdy".   Performances in major concert halls and festivals throughout Europe, include the Queen Elizabeth Hall and St. Martin in the Fields (London), the Tivoli Vredenburg Hall (Utrecht, Netherlands), MITO festival (Milan and Turin), Sala Mozart (Bologna). He has been  a soloist with all the top South African Orchestras and is a regular guest at all the major music associations in the country. Jan is also interested in historical instruments and regularly gives recitals on 19th century pianos.