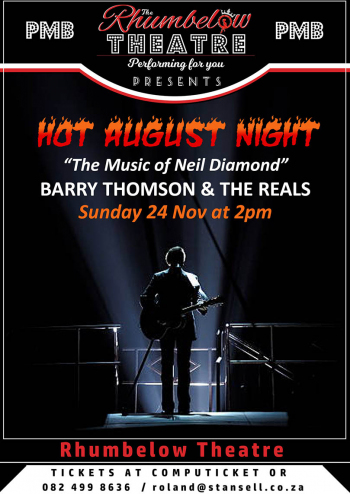 Paying respect to the music of this legendary artist composer and performer are Durban’s own tribute band ‘The Reals’ with Barry Thomson on guitar and vocals, musical director Dawn Selby on keyboards and vocals, Mali Sewell on drums and vocals and Jason Andrew on bass guitar and vocals. Included in the repertoire of ‘Hot August Night’ are Diamond’s hit songs ‘Cracklin' Rosie, ‘Song Sung Blue’, ‘Longfellow Serenade’, ‘Desiree, ‘You Don't Bring Me Flowers’, ‘America’, ‘Heartlight’, ‘Sweet Caroline’ and ‘I’m A Believer’. A show not to be missed!

Book at COMPUTICKET or email Roland for bookings and get that money rolling in.
Cell 0824998636
Email : roland@stansell.co.za
events.durbantheatre.com