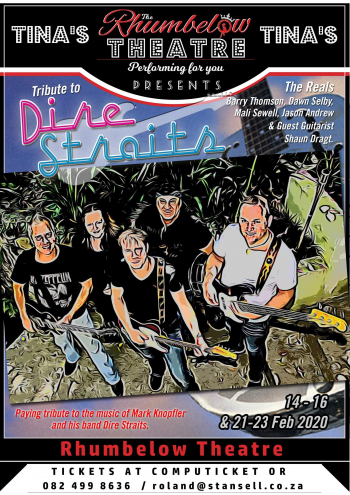 PLEASE NOTE THAT DUE TO LOAD SHEDDING BOTH SUNDAY SHOWS WILL START AT  13.30 PROMPTLY AS POWER IS OFF FROM 4PM

Back by popular demand.

Paying tribute to the music of Mark Knopfler and his band Dire Straits.

Dire Straits was a British rock band formed in 1977 by Mark Knopfler (lead vocals and lead guitar) and his younger brother David Knopfler. Their sound was influenced by a variety of musical styles including jazz, folk and blues, and contrasted with the prominence of punk rock during their early years. Their more conventional sound appealed to modern audiences weary of the overproduced stadium rock of the 1970s.

Dire Straits' fifth album ‘Brothers in Arms’, released in May 1985 was their highest selling studio album with sales of over 30 million. It was listed in the Guinness Book of World Records as the first compact disc to sell a million copies, helping to popularize the CD format. It was one of the first albums recorded on digital equipment and the title track is reported to be the world's first CD single. In August 1986, the song which launched MTV Europe was another Knopfler hit ‘Money for Nothing’ and featured Sting in a cameo vocal role.

To date, Dire Straits have sold in excess of 120 million albums and this show features a selection of their hit songs including, ‘Brothers in Arms’, ‘Walk of Life’, ‘So Far Away’, ‘Sultans of Swing’, ‘Romeo and Juliet’, ‘Tunnel of Love’, ‘Private Investigations’ and ‘Money for Nothing’.

Book at Computicket or email Roland for bookings and get that money rolling in.
Cell 0824998636
Email: roland@stansell.co.za
Website: https://events.durbantheatre.com/

Tina’s Restaurant  - www.tinashotel.co.za/
Booking is essential for Tina’s Restaurant as seating is limited – 031 764 7843
We recommend that you arrive no later than 120 min before show time for the Restaurant.
A-la-Carte menu available.
EVENING BUFFET – R 130-00 per head (show bookings)
SUNDAY ROAST BUFFET – R 130-00
Please indicate that you are a theatre booking when making your reservation.
Payment for Restaurant – CASH, CREDIT CARD or ZAPPER
Full Bar Available