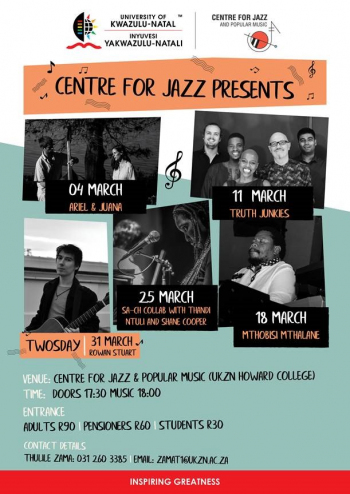 The Centre for Jazz and Popular Music proudly presents The Truth Junkies on Wednesday 11 March 2020 at 18:00.

Introducing the Truth Junkies: In a post truth world where a recent Time Magazine cover chillingly asks “Is Truth Dead?” came The Truth Junkies. Fake News, Fake qualifications, Deep fakes; and you realize that the only truth that is left to us, is music. The crave truth, they crave music. They are The Truth Junkies. With their roots firmly in the eclectic combination of South African traditional forms as well as American jazz, the truth Junkies are exploring a sound that is truly reflective of our country’s jazz. The melding of the sound of Umakhweyana boy with conventional instruments and compositions is a very exciting journey. The concept of two guitars with Umakhweyana or else three guitars is also another deviation from the tried and tested.

With such strong improvisers in the line-up, the music has to give that platform for those voices to shine. Marius Botha studied playing fretless bass under Marc Duby and Joe Delew, spent 8 years as a “Utensil” in Syd Kitchen’s band called Syd Kitchen and The Utensils. In 2016 Marius decided to move to guitar, creativity flowed, new compositions emerged and the need for an outlet became paramount. He coproduced Madala Kunene’s 1959, recollections of Forceful removals (Back in Kitomena) co-wrote and produced Lu Dlamini in the same year. The Truth Junkies were obvious choices by Marius himself to help him realize the noises of our city, cries of our nation that has been haunting him all his youth, calling for a rich and tasteful Durban mixed Masala From being a leader of a 270-strong choir at Port Natal High School – Durban, “I knew music brought me peace ever since”. After studying education at UKZN and through UNISA Marius worked at Durban’s Coastal Music – 1985- 1991 where he got inspired to build own guitars and assemble own sound system which is still in good use today. The Guitar Doctor- Guitar building – design & repairs business was born. Now he successfully runs The Headroom Studio, a favourite recording and production facility in Durban.

Lu Dlamini has grown into one of South Africa’s premier artists. Her previous release “Ulimilami” will in future be a reference work in UNISA’s new course called African Composition, a recognition well deserved. Apart from the fact that she has quietly become a unique voice as Umakhweyana player, she has also honed an impressive guitar playing skill. Once again her beautifully unorthodox style is unique. Performing with the Truth Junkies has allowed Lu to showcase these faces of Lu Dlamini with strong new material. Nick Pitman is a guitarist, producer, and music teacher with over 10 years of experience as a recognized musician within the city’s vibrant performance scene. He has a sharp aptitude for blending and bending genre conventions, as evident in his latest single Rollercoaster featuring Nosihe Zulu. Riley Giandhari was born in Durban, South Africa. He started playing drums at the age of 3 and was mainly inspired by his father Pravin Giandhari who is also a professional drummer. At the age of 15, Riley started playing the drums at church and with a few gospel bands. Although he has considered degrees in other fields of study, he has always been drawn back to music and therefore enrolled to study Jazz at UKZN in 2013. Apart from studying music, he is currently a session drummer who records and performs with various musicians and artists. Riley has performed with artists such as Hugh Masekela, Neil Gonsalves, Brian Simpson, Mike Del Ferro and Raphael Clarkson. He also teaches drums at Kearsney College and gives private lessons in drums, keyboard, and music theory.  Ntobeko Shandu is from Inanda, North of Durban is a talented young musician whose accompaniment skills belies his age. Popularly known as Ntobass his bass playing reminds of a young Sipho Gumede with a rootsy melodic sense. He has played with the likes of Jazz Saxophonist Mfana Mlambo, and is also a member of Lu Dlamini’s band. His session skill has graced many recorded works.