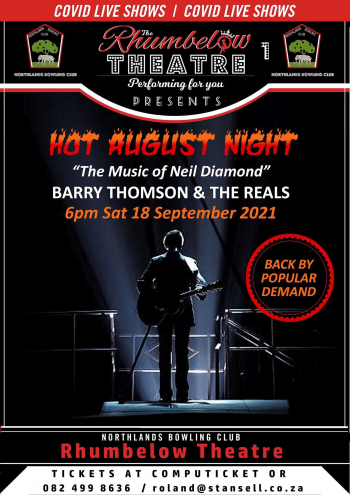 In Association with The Rhumbelow Theatre

Paying respect to the music of this legendary artist composer and performer are Durban’s own tribute band ‘The Reals’ with Barry Thomson on guitar and vocals, musical director Dawn Selby on keyboards and vocals, Mali Sewell on drums and vocals and Trevor Donjeany on bass guitar and vocals. Included in the repertoire of ‘Hot August Night’ are Diamond’s hit songs ‘Cracklin' Rosie, ‘Song Sung Blue’, ‘Longfellow Serenade’, ‘Desiree, ‘You Don't Bring Me Flowers’, ‘America’, ‘Heartlight’, ‘Sweet Caroline’ and ‘I’m A Believer’. A show not to be missed!

Top Talent at the Rhumbelow Theatre.

Whilst we are not changing our 2020 pricing, we would ask that if you are able to please assist us and the performers by donating a higher ticket price.

ALL SEATING WILL BE AT SEPARATE TABLES AND WE WILL OBVIOUSLY BE SEATING CO-HABITING COUPLES AND/OR FAMILY MEMBERS TOGETHER.